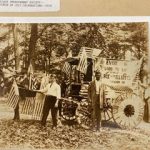 These documents collectively form a wonderful chronology of the evolution of the City of Falls Church and can be excellent resources for school or other local history projects.

Locations of the VPIS documents in the Virginia Room

Ten boxes total: Eight boxes consist of 206 files, one of Village Way newsletters, and one of VPIS photos.

Overall contents of these boxes are:

Check it out and order: https://www.bonfire.com/streams-of-falls-church/